Last week, I attended the monthly club meeting at a photography group I’m part of. I’m finding that this club is great in that the organizers mix things up from month to month. There are also a lot of photo outings outside the monthly meetings that makes it enjoyable. For August’s meeting, we met at McMenamin’s Edgefield out in Troutdale and did a photo scavenger hunt activity where we received clues and we would have to go out and about around the Edgefield campus to photograph what we think the clue refers to.

Members of the photo club met in front of the campus at 6:30pm where some people dispersed and started searching for the clues. I thought the light was still kind of harsh, so I dispersed to one of the restaurants on the campus waiting for sundown. A fellow photographer, my wife, and I took our time enjoying dinner and splurging on dessert, which I have to say their bread pudding heated up with ice cream melting on top was delicious. When we walked out of the restaurant with our stomachs full and smiles on our faces, the lighting was perfect for some night photography. I ended up shooting some pretty good shots for the clues.

Clue 1: Tee off in high ‘spirits’
One of my favorite shots from the night, this was taken from one of Edgefield’s tee area of their golf course towards a bar that, of course, serves “spirits.” The streak of lights going from the tee area to the pub are two flashlights that I had my wife carry over to the pub while the shutter was open for 30 seconds. 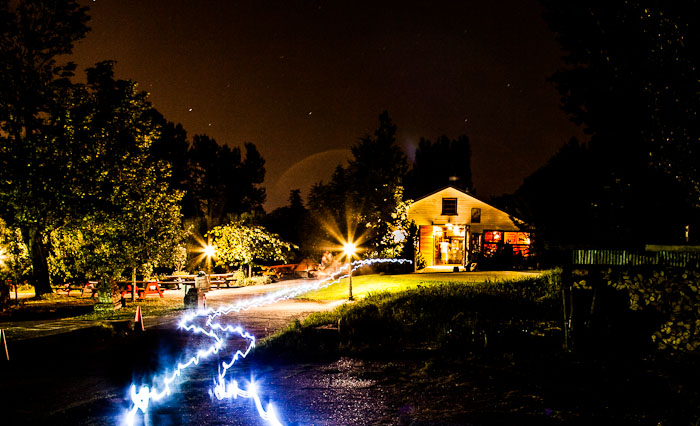 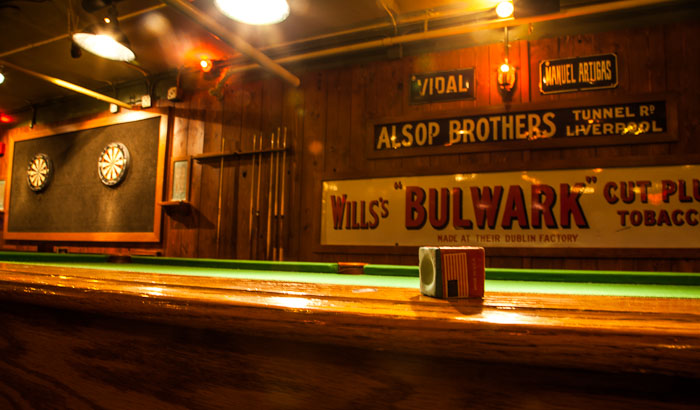 Clue 3: Jughead chimney
Found on the east side of campus showing the shadow of the plants on the chimney. It was really dark at this time, so light from both the flashlights and a camera flash were used to get the shadows and some exposure. 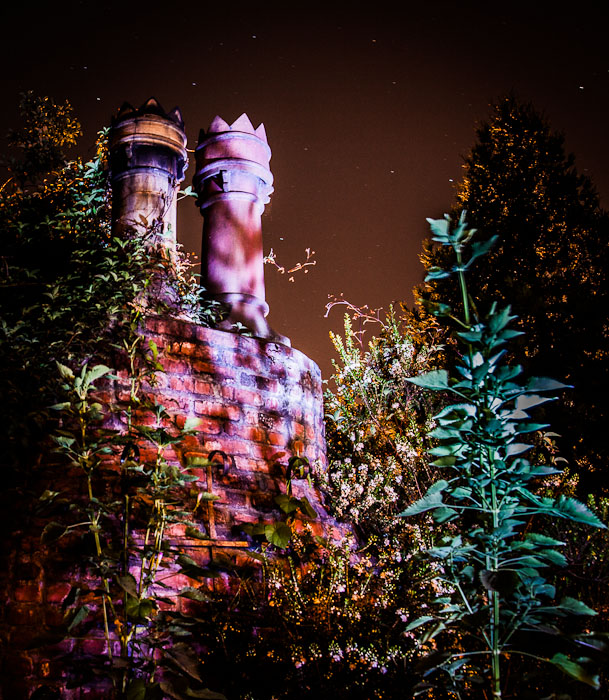 Clue 4: Filled with gently heated saltwater
Edgefield has a soaking pool which is very nice. However, by the time we got to this clue, it was closed, so I played with the entrance, which turned out well. I did have to light up the sign a bit with the flash. 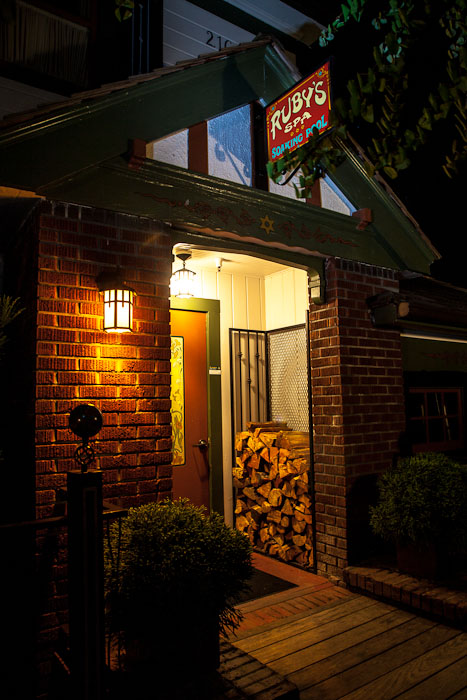 Clue 5: Towering fire deterrent
The most recognizable landmark on campus, I wanted to include something else with the tower to make this photo more interesting, which I think I accomplished well. This turned out to be another one of my favorite photos of the evening. 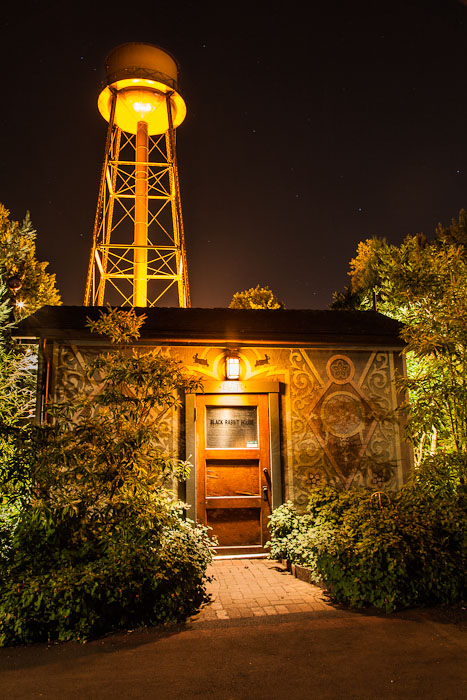 Clue 6: Take the stairs up to a 4-armed exit
I don’t really like taking photos of other artwork, but this clue was referring to mural of a 4-armed being around an Exit sign in one of the buildings. I played around with the camera a bit to put a little of my art into it. 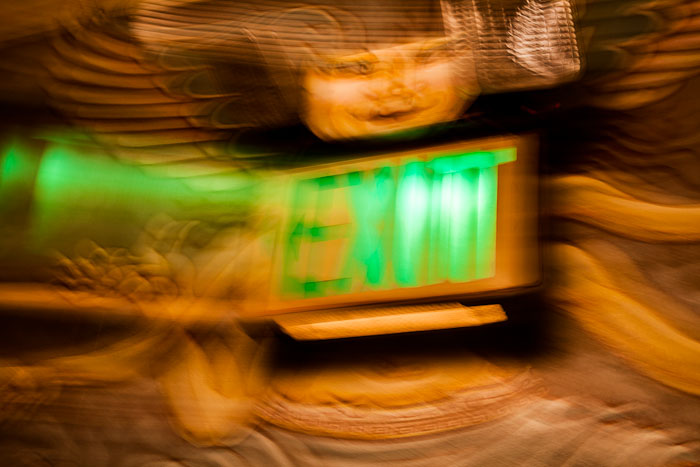 Clue 7: Adirondacks and ivy wall
I liked the shadows that were being drawn in this scene, so I decided to have a shadow of me in this shot. After looking at this shot at home, I thought it would have been cool to have my shadow grab a glass on the table. Oh well! 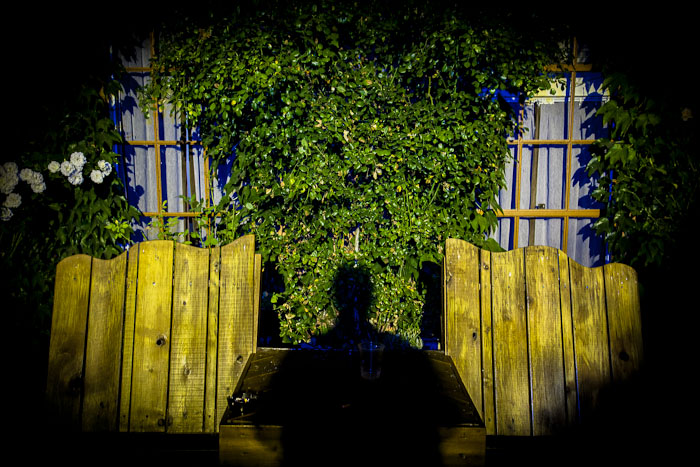 Clue 8: Garcia Bronze
Another shot of an art piece that really doesn’t make it my own, I decided to take a close-up of the statue and use an off-camera flash to give some light and detail. 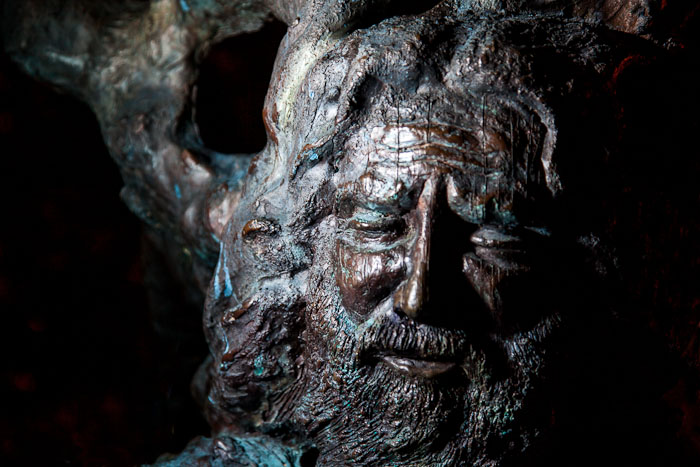 Clue 9: You will hear songs such as “Truckin'”, “Casey Jones”, and “Shakedown Street” here.
This was a bit of a tricky clue. The songs were all from The Grateful Dead and, looking at an informational map, there was a pub on campus dedicated to them. This photo pretty much shows all of the pub. 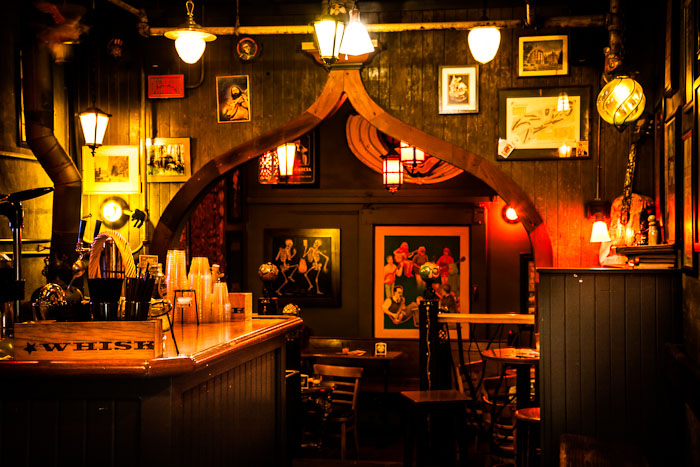 Clue 10: Served as the laundry back in the working farm days
Another clue where you would have to read the informational map to get, the Power Station used to be a laundry facility back in the day. This photo is of the entrance. I love how the trees are covering part of the signage. 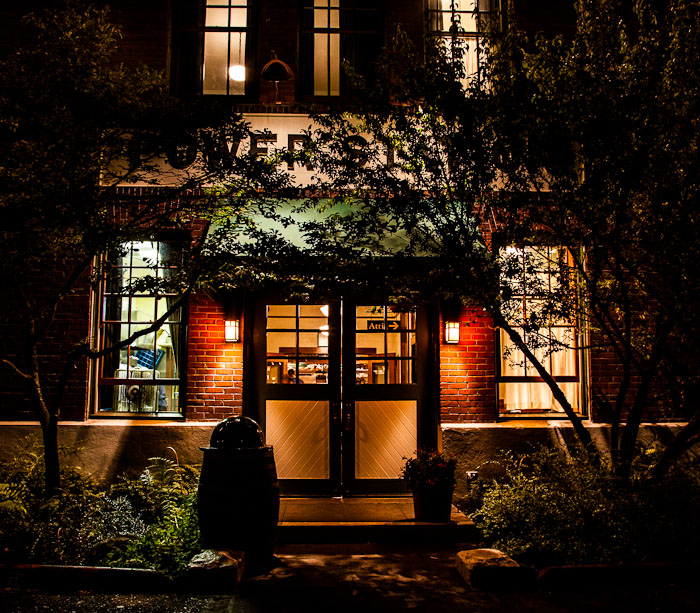 Clue (extra credit): Got valves
There are a lot of pipes and valves around the Edgefield campus. This photo is of just one of the areas that I hope the clue was referring to. The pipes were very artistic and this is a photo of another person’s art, but I REALLY like how this one turned out. I think I made it enough of my own art with the composition, saturation, and cropping to define this photo as part of my artwork too.