Messing with the Stars

There are times when you just have to be ready for anything. My wife and I were taking a road trip up to the Wenatchee Valley area in Washington to get out of town for a bit and celebrate my wife’s graduating from college. I had a surprise set up for her where we would be staying in a bed and breakfast outside of Leavenworth, WA. It turned out better than expected. The bed and breakfast was amazing in that the room we booked was in a building of it’s own and the they had a hot tub outside to enjoy anytime of the day. We were out to the hot tub area around 11pm to enjoy the stars when the opportunity to make my first attempt of taking some long exposures and a timelapse of the stars arose. I was excited and ran back inside to gather my camera equipment and set up.

I first tried to taking a long exposure. Messing with the settings of the camera a bit, I finally found what I wanted and took one long exposure that lasted around 40 minutes. It turned out amazing and after a little bit of post-processing to bring back the exposure a bit, this was my result. 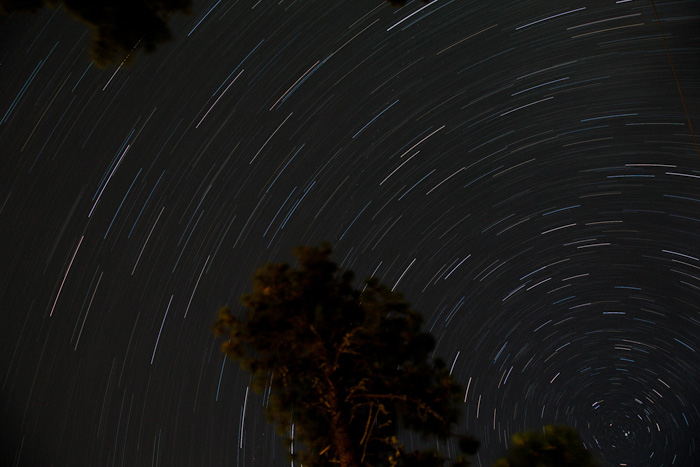 After the 40-minute exposure of that one photo, it was time to up the quantity of photos and start the timelapse process. I went into this not really knowing the best settings for taking a timelapse of the stars, so I took a few test shots before setting up my camera to take a shot every minute. I went with setting up my camera with 25600 ISO at f7.1 and kept the shutter open for 25 sec. I also set it up to shoot every minute. While the camera was going, I decided to enjoy the hot tub and stare at the stars for awhile. I kept the camera going when I decided to go in and get some sleep. When I woke up the next morning, the card was full of photos. I couldn’t see the result until I returned home a few days later.

Another timelapse opportunity arose when my wife and I decided to go camping west of Yakima, WA on our way home. I again took some test shots before setting up the camera to shoot at 25600 ISO at f9 with the shutter open for 30 sec. I had it open the shutter every minute as well all night long and into the morning while we were sleeping in the tent. There would be times in the night where I would wake up and wonder if the camera was still going and, sure enough, I heard the clicks of the shutter opening and closing; it was a great experience and sure hope to do it again.

When I got home, I was pleasantly surprised with the result for this being my first attempt, but learned on how to make it better for when the next opportunity arises such as shooting with a much lower ISO and wider f-stop.

I decided to make a small project out of this and put the two timelapses together with some music. Please enjoy the short video below. All-in-all, 354 photos were used to make this video. The first timelapse scene is the scene I took in the Yakima area where the second scene (and my favorite) was the very first attempt taken from Leavenworth. I want to give a special thanks to Kenny Carlile for letting me use his song “Astronomer,” where the full song can be listened to at http://soundcloud.com/kennycarlile/the-astronomer. Enjoy!